GOING ‘BENEATH THE SURFACE’ 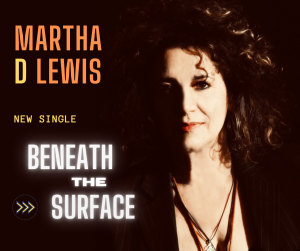 Listening Link Beneath the Surface, please click on Track #2: https://tinyurl.com/nwrtnda3

Full Media Kit for album ALL THAT YOU SEE includes BENEATH THE SURFACE WAV + MP3:
https://www.dropbox.com/sh/z5afo65y4n3bo6i/AACJVYoX3a7kdXe_PcHUTSy4a?dl=0

BENEATH THE SURFACE info: Exploring the complex and often vulnerable feelings of love. Does a harmonious upbringing make it easier to embrace the uncertainty and heady groundlessness of a new love?

As Martha sings:
“You believe in ever-after/that’s someplace I don’t belong/your loving home was filed with joy/  well that wasn’t true for me”.

BENEATH THE SURFACE is lifted from Martha’s critically acclaimed album,
ALL THAT YOU SEE is a journey of love, healing and social commentary songs that have been carefully crafted by British-Cypriot music maker, singer + songwriter and mentor, Martha D. Lewis. Jazz-blues infused songs strike a chord for our times as they tackle current issues such as: the ‘growing thorn of greed’ on LIARS CLUB, while A.I. MAN raises an important question: is humanity being replaced by machines? Songs of healing, finding hope again and love feature alongside strident social message songs. This is Martha D. Lewis’ sixth studio album but first to be recorded at Peter Gabriel’s Real World Studios.

Along the road to making ALL THAT YOU SEE, Martha D. Lewis experienced some unexpected twists and turns of fate, ones that would define the mood of the album, as Martha says in her own words,

“After a vast and varied musical journey in the last 2 decades of composition, theatre music, mentoring and film and documentary presenting, I returned to song writing in 2018 with a flurry of social-political songs about the world around us… this album is a story of angst and losing faith, healing and gaining hope.”

“ALL THAT YOU SEE is an expansive and engaging album put together by an interesting musician, singer and songwriter with a lot to say and an interesting way of doing it.” Fatea

“ listen to this tender record, full of vulnerable, beautiful songs and  you will discover a great singer who, surrounded by competent musicians, gives an insight into the vulnerable sides of her own life and at the same time shows herself to be combative as she embraces  life with all its emotions …” Rootstime

“… an intriguing new approach for Martha’s cutting-edge new album, ALL THAT YOU SEE” Music Arena GH

“Haunting lyrics and captivating performance.. an emotional gem that inspires, motivates, and reminds us that there is always hope.” Music + Gear (LIARS CLUB review)

Design for BENEATH THE SURFACE cover: Carole Lucas.